To say my love for Hunchback of Notre Dame has been deep and abiding would be an understatement. Esmerelda’s face graced my 3rd birthday cake, and my relationship with my Quasimodo finger puppet was unbreakable. HND was my first true pop-culture love.

Some might say it was inappropriate for me to watch as a 3-year-old, but my parents weren’t concerned. Any dark themes or sexual innuendos went waaay over my head until, years later, I revisited the movie at age 16. It was just as beautiful as I remembered, and the movie remains one of my favorites to this day.

Many of my peers shy away from HND, still haunted by memories of mobs and hellfire, but I believe that HND’s themes brought up important conversations ahead of its time. Here’s why HND is a must-watch for Christian feminists everywhere:

1. Nuanced conversations about the church.

Almost the entire movie takes place on the grounds of one of the most famous cathedrals in the world—Notre Dame—and the culture surrounding the church in 19th century Paris. Judge Claude Frollo, the villain, has spent his life praying all the right prayers and is considered “godly” by society’s terms, and yet his actions are motivated ultimately from a place of selfishness, hate, and fear. His legalism is ultimately what drives him to the brink of insanity, causing him to attempt to take out Quasimodo and an unconscious Esmerelda.

And yet, even more important than Frollo’s legalism is the frank conversation about the gypsies and their exclusion from the church. In Esmerelda’s God Help the Outcasts, she sings, Yes I know I’m just an outcast/I shouldn’t speak to You/Still I see Your face and wonder/Were You once an outcast too? HND raises the idea of a Jesus that is from the outskirts, a Jesus that considers the outsiders his people and seeks them out in his community. Esmerelda voices her doubt of a faith that excludes minorities, and her sinner’s plea contrasts deeply with the “Pharisees” prayers shown during the song.

2. Representation of diverse women and their sexuality. 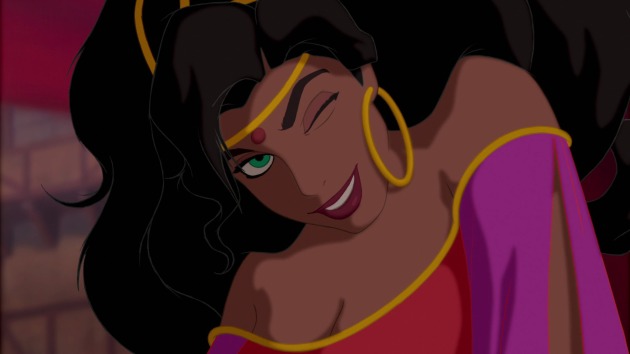 Okay, “diverse” is a little extreme since there’s really only one female character in this story, but she’s a woman of color and is a member of a people group ostracized by society. That was pretty unusual for ’90s Disney. Esmerelda isn’t portrayed as some kind of whore, but she’s also not the innocent virgin with doe eyes (*cough* ARIEL *cough*). She is nuanced. She’s smart and has a great sense of humor, and yet she doesn’t take any handouts. She’s outspoken. She’s sexually confident. To see that in a Disney movie is pretty much unheard of. And yet when Frollo makes sexual advances, the message the writers send is that she was not asking for it. Which leads me to point #3. . . 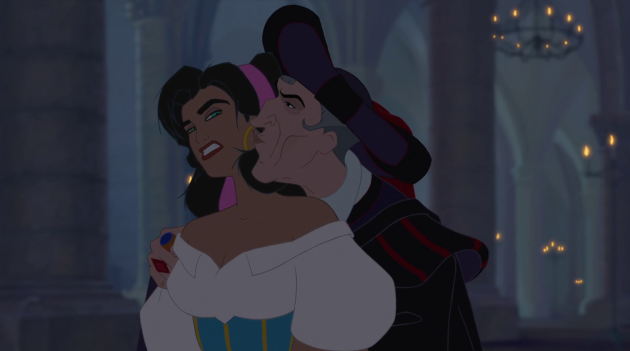 Frollo: You think you’ve outwitted me. But I’m a patient man. And gypsies don’t do well inside stone walls.

Esmerelda: What are you doing?

Frollo: I was just imagining a rope around that beautiful neck.

Esmerelda: I know what you were imagining.

Frollo: Such a clever witch. So typical of your kind to twist the truth to cloud the mind with unholy thoughts.

This would have been such an easy scene to leave out of the story, but I think it portrays something important about both characters: Esmerelda’s temporary helplessness and Frollo’s physical display of dominance over her sends chills down my spine every time.

The misinterpretation of Esmerelda’s sexuality is not unique to Frollo, however; Quasimodo also assumes her warmth towards him is something more. So when Esmerelda chooses the blonde, winsome Phoebus over Quasimodo, his shock and grief are understandable. But he doesn’t try to change her mind. He doesn’t decide he’s going to force her to do whatever he wants. You know what he does? HE ACCEPTS HER “NO”, AND HE MOVES FORWARD WITH HIS LIFE. Quasimodo is the biggest person in this story, because he stomachs the rejection with dignity, choosing to care for both her and Phoebus as their lives are placed in jeopardy. Being the hero doesn’t always mean you get the girl, and Quasimodo ultimately understands that being a nice guy does not make Esmerelda owe him anything.

4. Justice and compassion as important qualities. 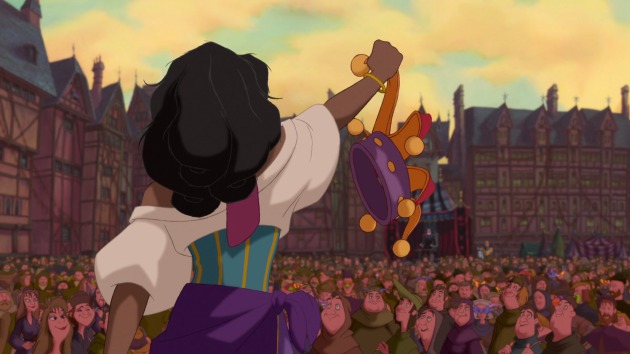 Frollo: How dare you defy me?

Esmerelda: You mistreat this poor boy the same way you mistreat my people. You speak of justice, yet you are cruel to those most in need of your help.

Religious genocide runs rampant in the Parisian community as Frollo searches the city for gypsies. When Esmerelda frees Quasimodo at the Feast of Fools, she speaks up for her people in a crucial setup for the witch hunts that occur later in the movie. She is advocating for her people, for the people who do not have the platform or power to speak up. It is the woman in the story who leads the rest of the characters in caring for those who are less-than. It is she who moves towards reconciliation in the last scene, when Quasimodo is welcomed into the city and finally feels a sense of belonging. Ultimately, Esmerelda is the pivotal character in this story and its messages: it matters to speak up when we are told to remain silent. There is room for all of us. We are all worthy of love and belonging. That is what makes the magic of HND so unique, and so invaluable and much better than any of the “ground-breaking” princess movies that Disney has come up with lately.