Promotion! At first, knowing you received a promotion brings excitement. You’re happy that all your hard work has paid off and you’re ready to move up to the next rank. In this case, that rank is being a manager. You’re optimistic to find out what the future holds and you’re ready to get started. The only problem is that as soon as you start working, you realize that being a manager is way harder than it looks.

This reminds me of a former coworker of mine, let’s call him Jeff. Jeff was promoted to manager of the branch of Dickey’s Barbecue I worked at. As a co-worker, before the promotion, Jeff worked hard, was funny, was helpful, and had many friends. Jeff was enjoyable to be around and everyone wanted to work with Jeff because they knew it would be a more enjoyable shift. Once Jeff was promoted to manager, things took a very sudden shift. The responsibilities and expectations of the job got to Jeff’s head and he did not take it very well. Soon, Jeff lost all of his friends at work. Myself, along with other staff members, started to see Jeff in a different light. He started to become more angry, less patient, very rude, and it was evident the power had gotten to his head. Jeff would, later on, end up quitting because he couldn’t handle the pressure of the job. Our boss revealed to us in a staff meeting what caused Jeff to quit, and we all received some insight on his role as a manager. Jeff had a very hard time boosting others. He was a very skilled worker and a valuable asset to our branch. The only issue is that he could not make others work better from a managerial role. If a new employee was slow at learning how to do a task Jeff would lose patience and take over himself. He would just tell the other employee to just do a basic task like sweeping, or doing dishes, while he did more difficult tasks. This caused the employees to lag behind, and when Jeff was not present and they were asked to do the task they simply could not. Over time the quality of the staff started to diminish, and this caused Jeff to stress more and become angry. This caused us, Jeff’s former friends and coworkers, to distance ourselves from Jeff, and lose compassion towards him. We all knew that Jeff received a raise and that he has more pull around the workplace. This made us believe that Jeff had no real worries and that he was just being irritable because he thought he was better than us because he got more power. (When in reality he got a lot more responsiblities.) 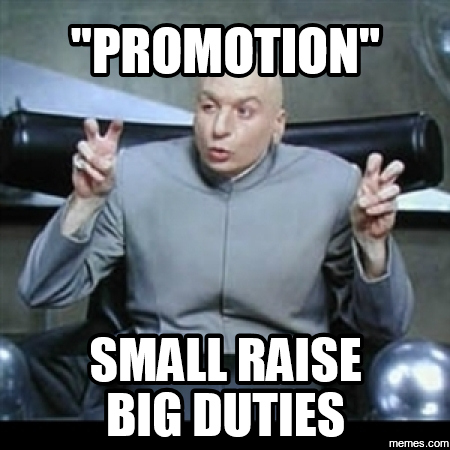 This caused us more senior employees to sometimes even test his power and stand up to him because we did not understand his actions.

Jeff tried to fight back and set people in their places, but he did so in a way that made him seem even more like a jerk. Although some did deserve to be punished…

…But sometimes he would even blow up at little mistakes.

The truth about this all though is that Jeff wasn’t just being a jerk. He was having a very difficult time adjusting to being a manager. This transition can be extremely difficult especially when people, like Jeff, have a hard time of letting go. He was not able to let go his old responsibilities and entrust it to his new employees. This caused the new employees to be incompetent thus adding more to Jeff’s stresses. This, in turn, would cause him to step away from a managerial role, because he truly did not know what he was getting into. When making that step from regular employee to a manager it is important to evaluate the job and see if this is truly something for you. You will not receive help from your former coworkers, and it is up to you call the shots. If you have problems with letting go of doing, you, like Jeff, will not succeed and will crash and burn.